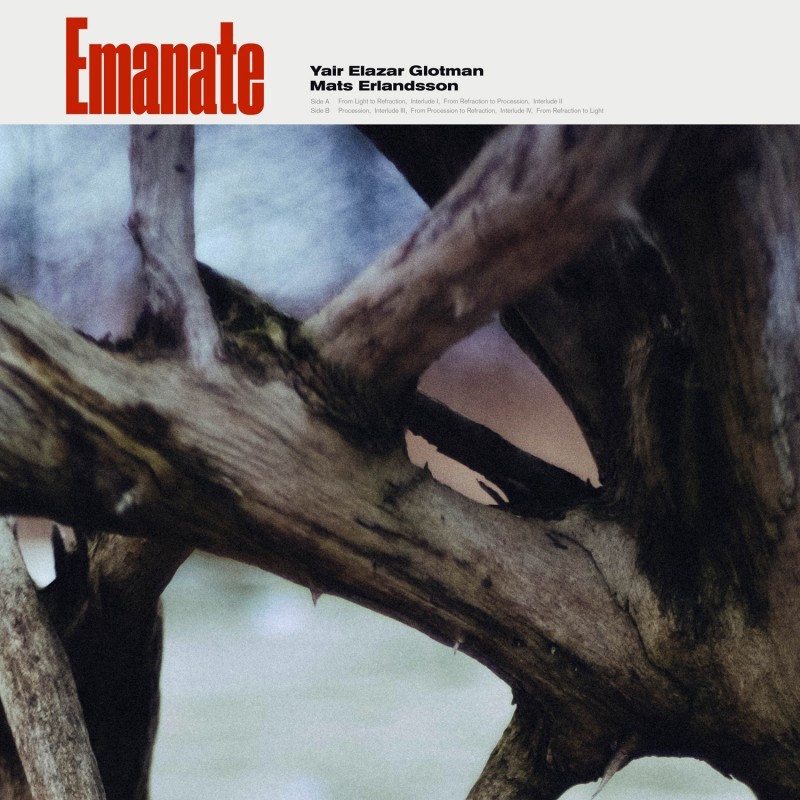 Both prolific composers in their own right working within the field of modern composition/ new electronic music, Berlin-based Yair Elazar Glotman and Stockholm-based Mats Erlandsson have been collaborating since 2015. ‘Negative Chambers’, their first joint album together was released on Miasmah Recordings in 2017, and saw them exploring new approaches to the use of traditional acoustic instruments. Having recently signed to FatCat’s 130701 imprint, and following closely on from Deutsche Gramophon’s release of Jóhann Jóhannsson’s ‘Last and First Men’ project which Yair co-composed, the pair’s sophomore album ‘Emanate’ is a powerful and stunningly executed extended duration work that utilises a fantastic ensemble cast and continues to explore their ideas of a ‘displaced sound’ – combining electronic and acoustic sound sources through both analogue and digital means to create an ambiguous composite work, a music that sounds neither clearly electronic or acoustic, existing instead in some in-between space.

In our oversaturated digital age where omnipresent media connectivity enables instant gratification and a continuous flood of competing interests, we’re frequently lead to make snap judgements as we multitask through a mass of incoming information – continually scanning and skipping over surfaces. Technological advances were supposed to free up creative thinking, but this flood has instead lead to an erosion of our creativity and attention. In many ways, the idea of a longform music is unsuited to and out of phase with these times. And yet, there is recent evidence of a reaction against this – witness the rise of the practise of mindfulness and the cultural elements of a ‘slow living’ movement; the huge success of Max Richter’s marathon ‘Sleep’ project; and the emergence of an expansive musical niche that draws from drone, electroacoustic and classical traditions and prioritises a more immersive, durational sound worlds – see artists like Kali Malone, Ellen Arkbro, Clarice Jensen, Abul Mogard, William Basinski, Claire M Singer, and labels like Longform Editions and XKatedral. Music here is intended to function not as ambient backdrop to other activities but as a deep listening, intensive immersion.

Aligned with these approaches, as opposed to New Age ambience or the endless soporific, ‘chilled’ music playlists, Glotman & Erlandsson’s work is suffused with a chromatic density and a tendency towards an edgy darkness that puts it closer to Hildur Guðnadóttir’s ‘Chernobyl’ score or Jóhannsson’s ‘The Miner’s Hymns’. It shares that same brassy, bass heavy weight and glowering, simmering sense of tension as well as a similar, sliding feeling of instability – a regular sense that it’s slipping inexorably elsewhere. Its authors cite the influence of Renaissance vocal polyphony; Giacinto Scelsi’s ‘Pranam II’; György Ligeti’s 1967 piece ‘Lontano’ (heard on the soundtrack to Kubrick’s ‘The Shining’ and Scorcese’s ‘Shutter Island’); as well as American composer Ingram Marshall, and Iceland’s Valgier Sigurdsson. Gorgeously recorded, beautifully focused and measured throughout, ‘Emanate’ is a texturally rich, deep spectrum exploration that flows and unfolds almost seamlessly throughout its fifty-minute span to create an energy field which feels simultaneously static and yet continually shifting.

Although divided into nine parts, ‘Emanate’ was envisaged and recorded as one long, single composition – an attempt to create an ensemble piece, closer in length and formal approach to classical music compositions than the ever-shorter spans of so much music now tailored for consumption via digital streaming. With time and space allocated for each of the instruments to respond to and expand upon the composition, its extended duration arises from an ongoing exchange between the instrumental ensemble, the electronic elements and the structure of the piece, and invites the listener to follow along an elongated dramatic arch. ‘Emanate’ was written and recorded in a gradual process, structured around the strict formal design of a three-part palindrome, following the pattern A1-B1-C-B2-A2. Each of these 5 parts is bridged by interludes (titled I-IV) which follow their own logic, working with the degradation and variable density of a separate, percussion-based material. Each part on the first side of the palindrome focuses on a specific approach to tonal harmony – chordal or intervallic, contrapuntal/canonic and melodic. As the piece progresses through its second half, these borders become blurred with material and approaches from the different parts bleeding into one another. As a consequence the piece has two parallel formal arches: one linear progression through the whole duration and one mirrored.

Begun as an electronic piece, ‘Emanate’ was composed, performed and recorded from a basic framework of material during a week of intense work at Yair’s Berlin studio, starting out with recordings of zithers and bowed strings processed through extensive electronic treatments – both digital and analogue. The electronic parts were written with a heavy focus on performance – playing parts using manual tools such as reel-to-reel-machines rather than merely working within the confines of the computer. The second part of the process involved transcribing parts of these electronic pieces for a score for a small chamber ensemble consisting of violin, cello, viola da gamba, trombone and double bass. Using this electronic structure to trace out new parts to be played by the ensemble, the score ended up being in time-based notation with all pitches fixed and added another layer of complexity by allowing performers enough freedom to make their own musical decisions when reacting to the electronics and to other players. The resulting instrumental parts weave in and out of the electronics, sometimes blending in with them entirely and sometimes acting individually.

Recording took place at Bonello studios in Berlin on February 2nd 2019, with an ensemble consisting of Hilary Jeffery (trombone), Lucy Railton (cello), Liam Byrne (Viola da gamba) and Simon Goff (violin). Yair played double bass and the piece was performed in its entirety twice, with the second take being selected as best. This swift recording method was only possible due to the exceptionally professional and talented ensemble and the fact that the work had been performed at the CTM festival two days before, providing enough rehearsal time. Additional overdubs were then recorded at Yair’s studio in Berlin and in Stockholm at EMS and the Royal College of Music. On these, Viktor Orri Arnarson played the viola, Sara Fors provided vocals and Maria W Horn added organ.

With individual track titles referring back to the form of the piece, the album’s title is suggestive of the work’s aesthetic resonance. As Mats explains, “it has to do with the textural qualities of the music itself. How it feels or behaves – its inherent seeping or slowly unfolding tendencies, as if it is a gas or liquid emanating from somewhere. It also relates to the transfer of ideas and intentions happening through the making and publishing of a musical work, where the album acts as a sort of container.”

Stunningly conceived and realised, ‘Emanate’ is a bold and gorgeously rich work that dilates time and exists in a blurred interzone between emotional states; between classical, and experimental electronic music music worlds. Step back a moment from the modern media coalface, allow yourself the time and space to be immersed in its currents and depths and ‘Emanate’ will amply reward your attention.