Some Things Just Stick in Your Mind

by Vashti Bunyan on FatCat Records 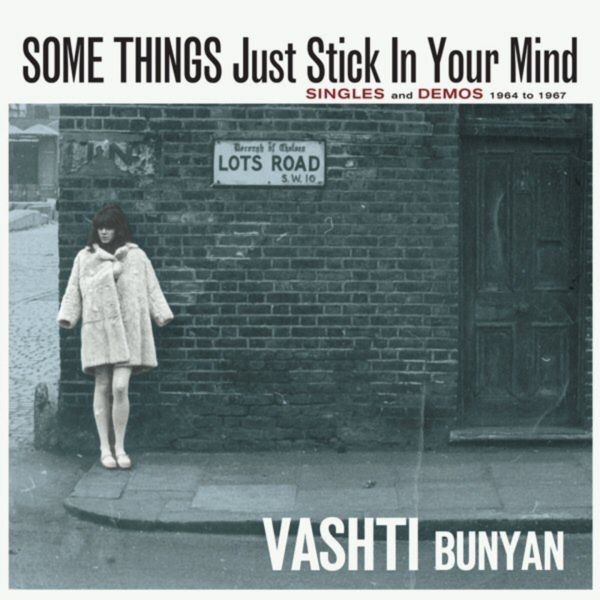 Following the amazing success story of Vashti Bunyan's recent re-emergence as an artist after an exile of over 30 years, we are proud and excited to release 'Some Things Just Stick In Your Mind', a comprehensive compilation of early recordings dating from the period prior to Vashti's classic 'Just another Diamond Day' album which was originally released in 1970.

Titled after Vashti's (Jagger/Richards-penned) debut single which opens the compilation, this double-album represents an attempt to both open out and draw a line under the past, and also to try to set the record straight about the disparity between how Vashti viewed (and still views) herself against the way she has been popularly perceived. Widely construed as a folk singer - a tag she fundamentally disagrees with - these recordings instead reveal Vashti as a pop singer, however 'fragile' and unique.

As Vashti explains in her liner notes to the album, "I have heard it said that Andrew Oldham took this fragile little folk-singer and tried to make her into a pop-singer against her will. No he didn't. Too fragile for his world I might have been, but that was no fault of his... I wanted to bring simple acoustic music into mainstream pop".

Before she dropped out and set off on that epic horse and cart journey up the length of the country, and before any of the '...Diamond Day' songs that saw her tarred under the 'folk' title, these recordings reveal a young London girl writing a series of beautiful love songs that resonate profoundly via an almost brutal efficiency and honesty. All very brief (many of them clocking in at under 2 minutes ), the songs here are ultra-economic distillations on a limited number of themes (of independence and freedom to move and to grow, "that love is changeable, that you cannot pin anything or anyone down in this world - and if you try it mostly won't work."). The melodies seem timelessly sweet and addictive. The vision at once delicate but somehow tough as granite. There's nothing extraneous, no drawn-out lingering over a lyrical theme or a melody. The songs are snappy and instead of ever outstaying their welcome, regularly leave you yearning for more and reaching for the replay. Isn't that the hallmark of good pop?

A complete collection of Vashti's existing early recordings, the album is divided across two discs and features 25 tracks - mostly rescued from a number of old acetates and quarter-inch tapes Vashti's brother John had found in his attic a few years ago.

The first disc gathers together the early singles (two of which were unreleased) and a set of taped demos recorded between 1965 - 67. Discovered via an industry friend by Rolling Stones manager/guru Andrew Loog Oldham, who gave her a Jagger/Richards song, ('Some Things...') Vashti was put in the studio to record the song accompanied by a full orchestra.

Backed by her own 'I Want To Be Alone' it was released as her debut single on the Decca label in May 1965. Despite a whirlwind of promotion, the single flopped and Vashti left to pursue more pared-down ambitions, recording 'Train Song'/'Love Song' for Columbia, with just voice, guitar and cello. Again foundering with no publicity upon its release in June 1966, Vashti left again, this time returning to Andrew Oldham and the Immediate label he had just started. She recorded three more singles ('Winter Is Blue' / 'Coldest Night Of The Year' / 'I'd Like To Walk Around In Your Mind') between 1966 - 1967, yet each again remained frustratingly unreleased, leading to Vashti's disenchantment with the industry and disappearance, bound for the Isle of Skye and a colourful if obscure existence in which she would not pick up a guitar again for over 30 years.

Deliberately separated off from this first disc (and separated by a one minute gap of silence on the promo), the second disc comprises the entire, unaltered contents of a long-forgotten tape discovered at the last minute before mastering, whilst Vashti was searching for one of the master reels for disc one. Featuring just Vashti's voice and guitar, unadorned and with no overdubs, the twelve songs here were rattled out one after another with spoken introduction in one hour of time she'd borrowed the money for and booked at a studio in central London in 1964. Four of these songs were then run out to a 7" acetate (since lost/destroyed) which would serve as her demo. These were the first recordings Vashti had ever made of the songs she had written aged eighteen and nineteen. Considering they sat gathering dust in a shed and then in an attic for nearly forty years, the tapes are amazingly well preserved, and after baking reveal a stunning set of raw, pure, intimate recordings. At times it almost feels like you're in the room with her; that these are songs sung for your ears alone.

Originally slated for release on the Spinney label after they rescued the '..Diamond Day' album, 'Some Things Just Stick In Your Mind - Singles and demos 1964 - 1967' was released by FatCat / Spinney in October 2007, and by DiCristina Stair Builders / Spinney in North America.

A limited edition version for Japan and for UK / US indies is available, which includes four additional exclusive tracks.

A feature-length documentary on Vashti's story, initially intended to focus solely on Vashti's much referenced pilgrimage to the Hebrides in relation to the (at the time) near mythical LP 'Just Another Diamond Day', is currently being completed. Directed by Kieran Evans (who directed St. Ettiene's acclaimed 'Finisterre'), her story has since developed into one of unforeseeable artistic rennaissance, with Vashti finally, deservedly stepping into a broader public consciousness.