by The Twilight Sad on FatCat Records 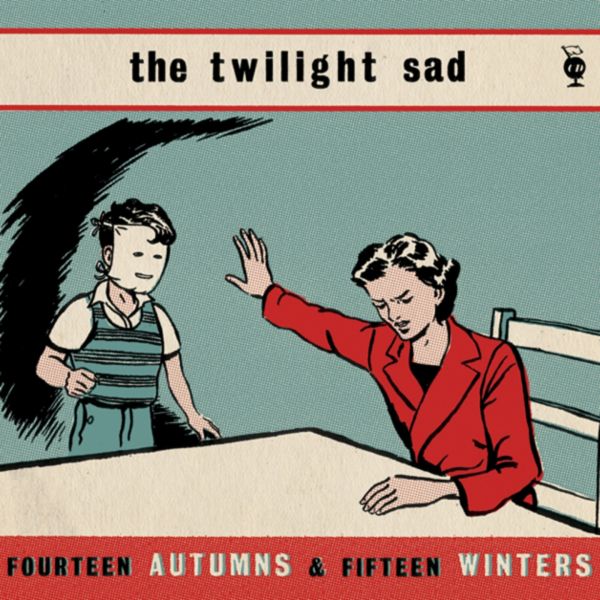 'Fourteen Autumns and Fifteen Winters', is the Twilight Sad's debut album - an LP that more than lives up to the early promise of their critically acclaimed US-only 2006 EP. Epic in scope and equally as intense, the band are inspired by a diverse range of music from Van Dyke Parks to Phil Spector, Daniel Johnston, and beyond, although the band are as influenced by their immediate geography ('the sticks just outside Glasgow'), as they are any particular musical reference points. Recorded at Chem 19 and Ca Va studios, Glasgow, and mixed and produced by the band and Peter Katis (Interpol, Mercury Rev, Mice Parade) in Tarquin Studios, Connecticut, 'Fourteen Autumns...' is nevertheless liable to evoke a more familiar indie canon, from white-noise era Creation Records, to fellow Scots Arab Strap or Mogwai.

Yet The Twilight Sad are unmistakeably their own band, and 'Fourteen Autumns...' is a complete record, the nine tracks working together to create a strong narrative flow. Deceptively simple songs are rendered transcendent. Bleached, overdriven guitars consistently ride a line between ambient and coruscating, working in tandem with an articulate, at times tumultuous rhythm section, forever poised between tension and release. Augmented by piano and more frequently accordion, which provide the songs with a dramatic swoon, The Twilight Sad purvey an awestruck, ragged sentimentality. Lyrically suggestive and metaphorical, their songs give glimpses of bitter experience and romantic failure, their songs at times verging on the anthemic or celebrative, yet firmly rooted in the familiar, often unsaid hurt behind day to day events.