by Mice Parade on FatCat Records 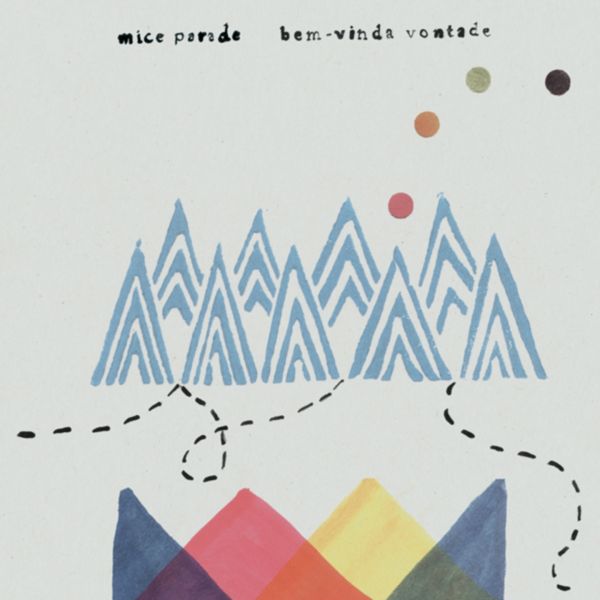 Mice Parade's fifth album, Bem-Vinda Vontade, is leagues beyond its predecessors in accessibility, coherence, musicianship... It's not often one hears an artist whose albums are so consistently different from one another, while still maintaining a clear lineage, or sense of principle, throughout. Vocals are more present than they have ever been in this once-instrumental band, while often set comfortably back in the mix. The subtle placements of complex rhythms that we've come to expect from Mice Parade are also in abundance, but the songwriting is a different affair than previous efforts, built more around the dueling nylon-string guitars of the new live setup, and delivered with a heartfelt pop warmth.

As on past records, most of the instruments were played by songwriter Adam Pierce, though a closer inspection of the liner notes will reveal a host of guests from around the world. Iceland's Kristin Anna Valtysdottir (mum, storsveit nix noltes) sings her surreal heart out on two tracks; including the radio single Nights Wave. Drummer Doug Scharin (June of 44, HiM) appears twice as well, along with Dylan Cristy (Dylan Group). These folks are all in the live band, which toured across the country with Stereolab last year on the way to their own sold out 7-city tour of Japan. It was there that Adam met with Ikuko Harada (lead singer of Sony Japan's gold-selling Clammbon, whose 2003 album he co-produced). Ikuko sang on Ground As Cold As Common in both Japanese and English. Marc Wolf (Tower Recordings) and Rob Laakso (Diamond Nights, Swirlies, Lansing-Dreiden) chime in as well with additional guitars.

Half of Bem-Vinda was recorded with Interpol engineer and long time friend and bandmate Peter Katis, at his own Tarquin Studios in Bridgeport, CT. The other half was recorded in the basement of Adam's home (as was all of the last album and many before it) in Mt Vernon, NY, the last stop on the subway out through the Bronx. The recordings were done with the same principles in mind that people have come to connect with Mice Parade, where music doesn't need to be a perfected presentation. For example, all tracks are recorded acoustically in real time with microphones. There is never any computer programming or sequencing, contrary to the past assumptions of critics and fans alike. There are some songs where edits have been made on a computer, perhaps for shortening a part that was too long or connecting parts together, but the fast flickers of guitar that guide us through the transition between tracks 2 & 3 - for another example - are all recorded to a rolling reel of tape and played repetitively. Many people do such things, always have, and Mice Parade has never meant to declare anything about such old-fashioned methods, but after the course of several albums, the same questions are often asked by writers and others so we just thought we'd clear it up. Additionally, most individual tracks as well as final mixes are captured in only one take each. The idea is not to hide from a mistake in performance, but to accept imperfection as natural and human.

Bem-Vinda Vontade translates from Portuguese into something like 'Welcome, Will' and can be considered a sister album to last year's Obrigado Saudade, which [very, very roughly] becomes 'Thankyou Nostalgia.' The resulting phrase - obrigado saudade, bem-vinda vontade - is intentional. And to some, musical.